From plant adaptation to the environment to human disease control, common regulators to plants and animals.

From plant adaptation to the environment to human disease control, the team of Christian Meyer "Nitrogen Use, Transport and signaling" in collaboration with Belgium teams of the Vlaams Instituut voor Biotechnologie (VIB), found common regulators to plants and animals. They show that a mutated protein (YAK1) allow to counteract the effects of another protein (TOR) consequently reducing growth and metabolism. published in Cell Reports, their results open up new perspectives to improve plant growth, human cancer therapy or neurological diseases.

Found in animals, plants, fungi and yeasts, the protein « Target Of Rapamycin » (TOR) control many key biological processes as cell proliferation and metabolic activities. TOR is an enzyme of kinase type; it means that this enzyme adds a phosphate on aminoacids of target proteins to regulate its activity or stabilize it.

TOR activity is increased in numerous human cancers and its inhibitors can reduce the proliferation of cancers. Among them, the most famous is rapamycin, an antibiotic discovered in the 70s and produced by a bacterium found in the Easter Islands (Rapa Nui).

In plants TOR regulates growth and yield of defense against pathogens. Scientists shown that genetic mutations of TOR affecting the activity of the protein reduce drastically growth and slow down the development.

TOR's hammer
Scientists of the IJPB team of Christian Meyer "Nitrogen Use, Transport and signaling" in collaboration with Belgium teams, used the model plant Arabidopsis thaliana to identify new mutations suppressing the growth and allowing to compensate TOR defects. Thanks to this strategy another kinase, YAK1 (Yet Another Kinase 1) also existing in yeast, was identified. The mutated YAK1 allow to plants already affected in TOR activity to recover a bigger size and a better growth. The metabolic disturbances linked to the inactivation of TOR are also decreased. Then, YAK1 inactivation by TOR seams to be necessary to activate the plant growth.

Homologues of the YAK1 kinase do exit in animals. In human notably, those homologues (including DYRK1A) are involved among others in symptoms of trisomy 21 or autism.

A better understanding of links between TOR and YAK1 could improve cultivated plants adaptation performances to the environment, but also therapies of human diseases linked to cell proliferation (as cancers) or to neurological development. Indeed, a hight proportion of genes involved in human cancers do also exist in Arabidopsis and cell processes associated to cell proliferation are very similars, for example, in response to some pathogens. 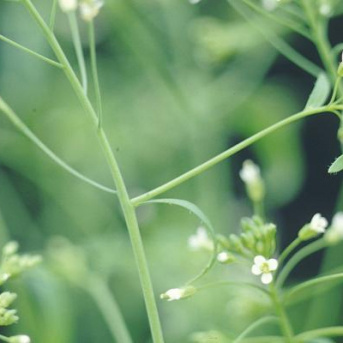