I am an INRAE senior scientist interested in designing original image analysis and computational modelling strategies to elucidate the principles that subtend biological patterns and functions, with a particular emphasis on plant development and morphogenesis.
Motivation

I am a biomathematician aiming at deciphering complexity in biological systems. My research is motivated by the conviction that biological systems are complex but cannot be as complex as they look! By designing original quantitative image analysis strategies and computer modelling approaches, I therefore aim at revealing, characterizing and elucidating the laws that subtend spatial organizations and functions in biological systems at different scales, from sub-cellular to tissular patterns.

During my initial training in cellular (and general) biology, I rapidly became interested in quantitative and formal approaches of biological questions. After a master (former DEA) in biomathematics, I completed my PhD in 1997 at the BioInformatics Group/AnimatLab at Ecole Normale Supérieure in Paris, working on unsupervised image segmentation based on distributed genetic algorithms.

I was hired as an Associate Professor at University Pierre et Marie Curie in Paris in 1998 and I joined the Neurobiology of Olfaction and of Food Intake lab at INRA Jouy-en-Josas in 2000. There, I developed neuroinformatics approaches for the 3D reconstruction and statistical atlasing of neuronal structures in the rodent brain.

In 2011, I set up the Digital Imaging and Modeling team in Institut Jean-Pierre Bourgin at INRA Versailles and was hired as Research Director at INRA (now INRAE) in 2017. With my team, we develop image analysis methods, spatial statistical approaches, and mechanistic computer models from microscopy image data to quantify, characterize and understand spatial organizations and functions at multiple scales. Applications cover plant and animal systems, with a strong emphasis on plant morphogenesis. 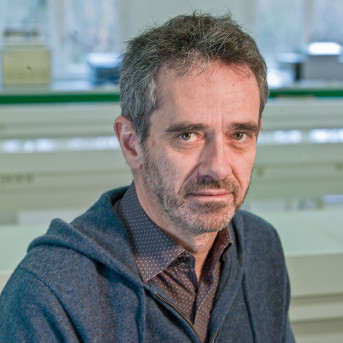