Understanding factors controlling pollen fertility is a main issue to maintain biodiversity and for agriculture
Cytoplasmic male sterilities (CMS) are determinant for a viable economy of some performing hybrid seed productions. Probably CMS genes are also more frequent in mitochondial genomes of wild type species than suggested by observation of female in populations as attested by recent discoveries of so called cryptic CMS (not reveled by sexual polymorphism in population), particularly in Arabidopsis thaliana. Natural or induced variations impact of cytoplamic genomes and nuclear genes involved in maintenance of their expression is poorly explored despite results accumulated suggesting a role in plant adaptation to their environment. Here, it has been reveled a new role in CMS of natural variation from an essential proteins family involved in genetic expression of organites.
In numerous flowering plants, sex determinism can be jointly controled by mitochondrial genome (maternal inheritance) and nuclear genome (mendelian heredity). This phenomenon called male sterility (CMS), induce sterility in male plants and turn them female when harboring a mitochondrial genome called sterilizing and in absence of nuclear genes called fertility restorer (Rf). CMS induce sexual polymorphism in natural populations and are used for reproduction of  seeds at high scale of cultivated plants. Nowadays most of Rf genes identified are members of a wide familly of encoded proteins addressed to organites: the pentatricopeptide repeat proteins (PPR). Linked to specific ARN sequences, a majority of PPR proteins allow genes expression, except the PPR-Rf inhibiting the expression of sterilizing mitochondrial genes. A conserved PPR protein related to PPR-Rf, RFL24 in Arabidopsis thaliana which conversely to all PPR-Rf proteins studied promote pollen abortion with a sterilizing cytoplasm.  The Sha natural allele (Tadjikistan origin), RFL24 from the Cvi-0 (Cape Verde origin) induce a male sterility resulting from the expression of the gene during the early stage of pollen development. Our results  suggest that maintenance of RFL24 would be linked to a primary role consisting to ensure a good mitochondrial functioning with a recruiting of the sterility gene for its own expression. 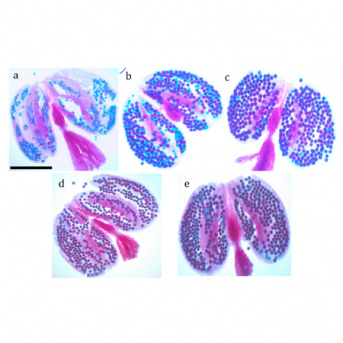