Kalina Haas has recently joined the "Primary Cell Wall" (PAR) team at the IJPB, as a Research Scientist ("Chargée de recherche"). With her background in physics and quantitative biology in neurosciences, she brings in unique and complementary skills in optics, the use of biosensors and computational modeling. Her 5-year ERC Young Investigator Starting Grant entitled “STORMtheWALL” will provide funding for the recruitment of a team and the acquisition of next generation super-resolution microscopy equipment.

STORMtheWALL Project
How plants grow constitutes a major frontier in plant research.
Growth is a multi-scale process; at a subcellular scale, it depends on the expansion of the cell walls, which involves changes in the chemistry and architecture of constituent polymer networks. Little is known on the nature and the control of the cell wall changes that are critical for growth, in striking contrast to the, often detailed, knowledge of growth-regulating signaling networks. This is in part due to the lack of appropriate tools to study changes in the complex cell wall polymer assemblies that often occur at fast (~s) and small (<micrometer) scales.

STORMtheWALL firstly aims to breach the spatial limits of the tools by using multi-target optical nanoscopy to visualize cell wall architecture and remodeling, and secondly, to overcome their temporal limits by using light-gated actuators and multiplexed intracellular biosensors to simultaneously perturb and monitor the system dynamics in vivo. In particular, this project will address pectin remodeling, the role of which in plant growth was shown to be critical, but without clearly understanding the mechanism.

STORMtheWALL will provide an essential framework, not only for understanding plant growth and morphogenesis but also for the study of life beyond the plasma membrane, for instance in relation to immunity, multicellularity, or symbiosis.

Perspectives
This project will open a new dimension for the nanoscale understanding of the cell wall and unravel a novel pectin-based mechanism of its active reorganization. STORMtheWALL will provide realistic models for plant cell wall architecture. Such models are an essential brick in multiscale models predicting crop growth and yield in changing environments. 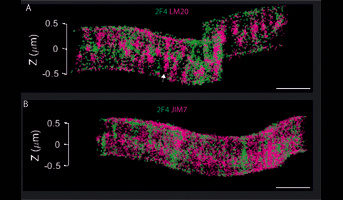