Deciphering Meiotic Mechanisms
Our team is studying the mechanisms that control the course of meiosis, more specifically those that allow the correct distribution of chromosomes in sex cells (in plants, these are the cells that will give rise to the pollen grains and the embryo sacs). We are implementing various genetic screens in order to identify the molecular actors involved in the mechanisms of the formation and distribution of recombination events along the chromosomes. As an example, our studies allowed for the description of the molecular machinery involved in the formation of chromosomal DNA double strand breaks, the first step in genetic recombination. Among the proteins involved, we highlighted the key role of a topoisomerase-like complex formed by the SPO11-1/SPO11-2/MTOPOVIB proteins.

We are characterizing their genetic, cytological and molecular interactions with each other and with the structural elements of meiotic chromosomes in order to better understand their roles. We are also particularly interested in the mechanisms that control the repair of these DNA breaks toward the formation of crossovers, events that are the basis of genetic maps. How is this repair directed either toward the formation of crossovers or non-crossovers? What is the balance between pro and anti-crossover factors? We use biochemical approaches to elucidate the regulation of certain steps in the mechanism, and genetic and cytological approaches to understand how the formation and distribution of recombination events along chromosomes are controlled.

DAPI staining of chromosomes during prophase or at metaphase I (A. thaliana).

Meiosis in polyploid species
Our work explores the reciprocal relationships between meiotic recombination and polyploidy. It is now established that all angiosperms have experienced at least one, and usually several, rounds of polyploidy during their evolution. Many crops are indeed extant polyploids (e.g. wheat, rapeseed, some coffee and cotton species...). However, this evolutionary success is not straightforward, as newly formed polyploids usually feature disturbed meiotic behaviour due to the presence of an additional set of chromosomes. We seek to understand how the mechanisms of meiotic recombination have adapted to overcome the initial meiotic challenge faced by nascent polyploids. Conversely, we are studying the evolution of genes controlling meiotic recombination to understand the extent to which past polyploidization events have contributed to enriching the "meiotic toolbox" in plants. Finally, having observed that the frequency of recombination increases very significantly in some polyploids, we are trying to identify the genetic mechanisms responsible for this original phenomenon (coll. IGEPP Rennes).

Rapeseed (Brassica napus) flowers / Meiotic cells in Oilseed rape / Phylogenetic tree illustrating one major consequence of past and recent polyploidy events in flowering plants: the presence of multiple copies of the same meiotic protein in many species / Localization of homoeologous exchanges between two pairs of chromosomes (A1-C1 and A2-C2) in oilseed rape. The arrow indicates an exchange that has just occurred.

Imaging Meiosis
The investigation of meiosis is based on various methodological approaches. Those involving cellular imaging are particularly well represented: cytogenetics, immunofluorescence, 3D microscopy, live imaging, high-resolution microscopy, etc. The development of these techniques allows us to further our understanding of the mechanisms at work during meiosis by addressing multiple questions: What are the dynamics of chromosomes during the different phases of meiosis? What rules govern the spatial organization of chromosomes? How are the different stages of meiosis coordinated? How do homologous chromosomes recognize each other? How are the recombination sites on DNA distributed? What proteins are they composed of, and how is their assembly governed? Our team is making use of the PO-Cytology/Imaging platform (please insert the link to PO- page) to be at the forefront of the development of new imaging and image analysis approaches.

Translational projects
Recent advances in our understanding of the mechanisms of meiosis and meiotic recombination have opened up new avenues of research, in particular in  the improvement of plant varieties: the possibility of increasing recombination rate, the ability to fix genotypes of interest, etc. However, the transfer of knowledge between model species and crops is not necessarily straightforward, and needs to be evaluated further. This is one of the tasks we are working on. 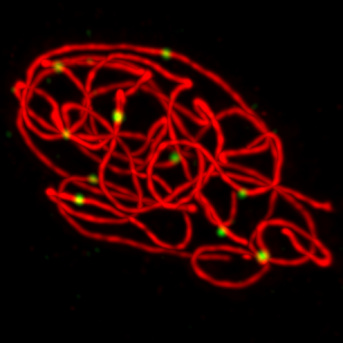