A new mechanism for reversing male sterility in rapeseed hybrids

These original results pave the way for the development of synthetic restorer genes for cytoplasmic male sterility for which no effective restorer has yet been identified.

Hybrid seed production in many field crop species, such as rapeseed, is greatly facilitated by the use of cytoplasmic male sterility (CMS). These natural genetic systems make male plants sterile. They can then only reproduce by inter-crossing. CMSs are thus widely used by seed companies to reduce the cost of hybrid seed production. For field crop species where grains are harvested (rapeseed, rice, maize ...), it is however useful that hybrid plants, once produced, regain a normal male fertility in order to be able to self-fertilize. This is called restored hybrids. Reversion of CMSs are whose genetic determinants are mitochondrial, is made possible by the presence in hybrids of so-called fertility restorer (Rf) nuclear genes. Rf genes encode proteins addressed to mitochondria and most often interfere with the expression of mitochondrial sterility-inducing genes.

Recently years, several Rf genes have been identified in various crop species, and most of them encode proteins belonging to the large family of pentatricopeptide repeat (PPR) proteins 1,2. PPR proteins are highly specific RNA-binding proteins that have become highly diverse in eukaryotes, mostly in land plants. PPR proteins have been shown to play diverse roles in mitochondrial and chloroplast RNA expression, ranging from transcription to translation. The suppressive activity of PPR-Rf proteins most commonly alters the level of mRNAs from CMS genes.

The OGU-INRA CMS has been widely used for the production of hybrid oilseed rape seeds world wide. The genetic determinants of this CMS have been known for a long time, but how the restorer gene (named PPR-B or Rfo) manages to switch off the sterility-inducing mitochondrial gene (orf138) was still not understood.

Hakim Mireau's team "Organelles and reproduction" OrgaRepro showed as early as 2008 that the CMS restorer protein OGU-INRA was an exception among Rf genes because it does not affect the sterility mRNA orf138 in its size or abundance 3. The PPR-B protein indeed associates with orf138 mRNA in vivo and this association led to a strong decrease in the level of orf138 protein, especially in tapetal cells and developing pollen grains 3. The PPR-B protein was suspected to impact orf138 mRNA translation, but this hypothesis had to be validated and the way in which PPR-B could interfere with orf138 transcript translation determined.

The OrgaRepro team has just published a study in the journal PNAS in which they show that this functional inactivation involves specific inhibition of translation of the OGU-INRA mitochondrial gene.
However, this control does not operate at the level of the translation initiation step, which is generally used to regulate translation in bacteria. The location of the PPR-B binding site in the coding sequence of orf138 and the barely altered ribosome density upstream of this binding site when PPR-B is present strongly support that this translational control occurs by impeding the elongation of translation along the orf138 mRNA. Thus, PPR-B appears to act by blocking ribosome translocation during translational elongation along the orf138 transcript. PPR-B is the first fertility restorer protein shown to act in this way.

Outlook
The molecular mode of action of the PPR-B protein demonstrates that CMS genes can be inactivated by targeting a PPR protein in their coding sequence to inhibit their translation, regardless of the presence of sequences or structural elements favorable to RNA cleavage. Surprisingly, this translational inhibition involves a blockage of ribosome progression along the messenger RNA from the MSC gene. This is the first time that such a mechanism has been revealed. These observations should thus facilitate the production of synthetic fertility restorers for CMS systems for which effective natural fertility restorers could not be identified. 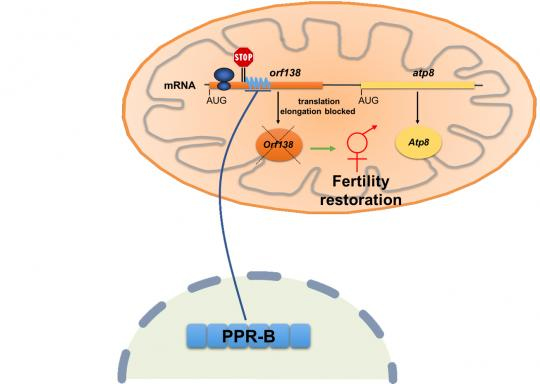 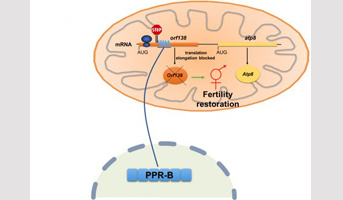 Legend: Schematic diagram illustrating the molecular mode of action of the fertility restorer PPR-B which, after transfer to mitochondria, specifically inhibits translational elongation along the mitochondrial mRNA orf138.