transgene RNA silencing siRNA DNA methylation histone chromatin
In the context of predictive biology approaches and scientific expertise for to inform public policies, it is essential to understand the role of the different chromatin epigenetic marks.
The transfer of genetic material by crossing or transgenesis, as well as the modification of genetic information by mutagenesis, can lead to local or global modifications of the genomice's epigenetic marks. It is therefore essential to understand the impact of these epigenetic modifications and precise the role of each of these marks. The epigenetic impact of genome modifications obtained by CRISPR technology must also need to be investigated.

For almost 40 years, the behavior of transgenic plants has been studied extensively. Depending on where they integrate in the genome, transgenes can be recognized as intrusive DNA sequences and silenced, or can be expressed stably over generations.

Attenuation of transgene DNA methylation by JMJ14 promotes the production of aberrant RNAs that can induce transgene posttranscriptional silencing. These results therefore indicate that, through JMJ14, transgenes remain susceptible to silencing, even when stably expressed. The maintenance of stably expressed transgenes in a probationary state of silencing susceptibility suggests that plants impose epigenetic marks on transgenes to durably distinguish them from endogenous genes. 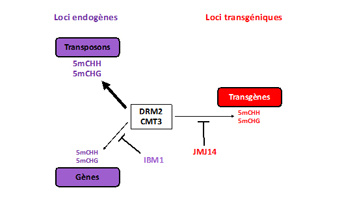