How are new stem cells formed in plants?

development meristem flower regulation transcription factor
Publication in the journal The Plant Cell, 27 August 2022
The architecture of plants becomes more and more complex as they grow as a result of the formation of new branches. Such branching involves the creation of new growing points, or meristems, in which newly formed stem cells are present. These meristems are formed through different steps with an initiation phase during which the new meristem emerges and an organization phase during which it will acquire its structure, in particular a population of newly-formed stem cells at its centre.
The study carried out in the FTA "Transcription Factors and Architecture" team in collaboration and published in The Plant Cell journal reveals a novel step key for the appearance of a new population of stem cells in meristems. This work shows that the CUP-SHAPED COTYLEDON (CUC) genes that are required for the early phases of meristem initiation have to be repressed to allow stem cell formation. The repressors of CUC genes have been identified and their mutation leads to defects in the overall organization of meristems, the formation of the stem cell population and ultimately to a delay in branching. The mutation of these factors also affects the establishment of stem cells in the flowers which are modified axillary meristems, thus demonstrating the conservation of the regulatory mechanism revealed here for all the aerial meristems newly formed during the life of the plant. 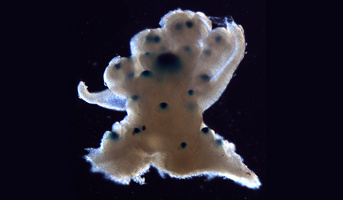