Seed coats are the interface between the developing zygotic tissue and the external environment. They provide mechanical and chemical protection from biotic and abiotic stress and control the extent of interactions and molecular fluxes. We are studying the genetic mechanisms underlying the formation and function of seed coats and their contribution to seed dormancy, germination, lifespan and the vigour of future seedlings.

The seed coats of a number of plant species accumulate polysaccharides in the epidermal cell layer during seed development. On imbibition, the pectin-rich polysaccharides swell, rupture the outer cell wall and form a sticky hydrogel that encapsulates the seed. Despite the metabolic investment required to make mucilage, no clear role has emerged, although there is evidence that it can influence germination and dispersal. Testa epidermal cell differentiation occurs through a sequence of easily distinguishable stages with the massive production of polysaccharides in a short time frame. The polysaccharides are either accumulated in the apoplast for subsequent mucilage formation or used to reinforce cell wall structures. This makes it an excellent genetic and histological model for studying the biosynthesis of polysaccharides as well as their interactions. We are studying mucilage production and epidermal cell morphology in two Brassicaceae, Arabidopsis and camelina. Through forward and reverse genetic approaches, including genome-wide association analyses, we are identifying and characterising genes involved in polysaccharide synthesis. Natural genetic variants for mucilage production are providing important clues as to how mucilage may improve plant fitness in the wild and how mother-plant environment affects its production.

Most plant seeds produce flavonoids in their seed coats or testa. Apart from being colourful pigments with antioxidant properties and health benefits, these specialized metabolites derived from the phenylpropanoid pathway contribute to physiological functions such as seed dormancy, germination, longevity, seed coat permeability and play vital roles in defence against pathogens and predators. A particular subclass of flavonoids, the proanthocyanidins (condensed tannins), is accumulated in considerable amounts specifically in the innermost cell layer of the inner integument (endothelium) in Arabidopsis, and these confer the brown colour to the seed on oxidation.
As they are toxic to the cell machinery, these compounds are stored in vacuoles after their biosynthesis. We are studying proanthocyanidin metabolism in Arabidopsis, with a particular interest in their subcellular trafficking and vacuolar sequestration, the mechanisms of which remaining poorly understood. We look for novel functions using molecular genetic approaches and also exploit a collection of transparent testa (tt) mutants to explore further how flavonoids synthesized during seed development on the mother plant impact seed physiology and tolerance to environmental stresses.

Multiple factors are known to influence seed coat permeability, notably the accumulation of hydrophobic biopolymers such as the lipid polyesters cutin and suberin, but the control and coordination of their production in the seed coat and their influence on seed physiology post-harvest is poorly understood. To identify the factors in the molecular control of seed permeability, we are carrying out phenotypic screens and characterising mutants.

Hormones as regulators of seed germination and longevity and integrators of environmental cues
(Contact Annie Marion-Poll and Loïc Rajjou)
During their development on the mother plant, seeds gain the capacity to germinate and, at the end of maturation, undergo intense dehydration prior to dispersion. In addition to acquiring desiccation tolerance so that the embryo can withstand this low state of hydration, seed germination is temporarily blocked in a process called dormancy.

Abscissic acid (ABA) is a plant hormone that plays a crucial role in activating these adaptive mechanisms essential for seed survival and the dispersal of the species. During imbibition, the catabolism of ABA allows dormancy to be broken and germination to be activated by gibberellins. The balance between these two hormones integrates external signals like light, temperature or nitrate and they act antagonistically on embryo growth and the hydrolysis of the endosperm. Using genetics, functional genomics (e.g. multi-omic analyses) and hormone-profiling, we study the ABA metabolism and signalling network during seed development and germination, in order to identify key factors involved in interactions with the environment and controlling dormancy and germination vigour.

Integrated multi-omic analyses (transcriptome, proteome, metabolome) indicate that on imbibition seeds re-induce their maturation program and, depending on environmental conditions, make metabolic and molecular adjustments that enable them to switch to a germination program or maintain dormancy. Redox homeostasis is a central element in this modulating this switch. Notably, post-translational modifications (PTM) induced by radical species (i.e active forms of oxygen, ROS; nitrogen monoxide, NO) have been shown to the control the dormancy/germination shift via the regulation of ABA-dependent metabolism and signalling. 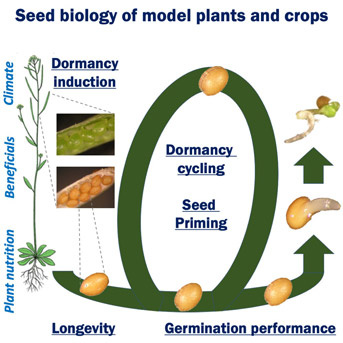