The role of pectin metabolism in growth control
We have proposed a new paradigm for cell wall expansion, in which the formation of lobes in epidermal cells is driven by the expansion of oriented nanofilaments of the pectic polymer homogalacturonan (HG) in anticlinal cell walls. This expansion is driven by a phase transition from the more densely-packed methylesterified HG to more expanded, negatively charged demethylesterified HG. The demethylesterification is controlled by wall-associated pectin methylesterases (PME) and takes place preferentially at the lobed side of the cell wall (Fig. 2). We are investigating if a similar process explains why pectin metabolism is critical for the expansion of other cell types (Fig. 3).

Wall integrity signaling
We study the involvement of cell wall signaling feedback mechanisms in the regulation of the cell wall metabolism during growth and development. In this context, we are in particular interested in the role of Rapid ALkalinisation Factor (RALF) peptide signaling (Fig. 4).

The role of cell wall metabolism in plant-fungus interaction
We have developed a new method for the profiling of oligogalacturonides (OG) in living tissues (Fig. 5).  This revealed the unsuspected complexity of the OGs that are produced during the infection of Arabidopsis with Botrytis cinerea and has led to the identification of novel defense-inducing OGs, which may be developed as Natural Defense Stimulators (Fig. 1). We are also interested in the role of oligosaccharide signaling during plant development. 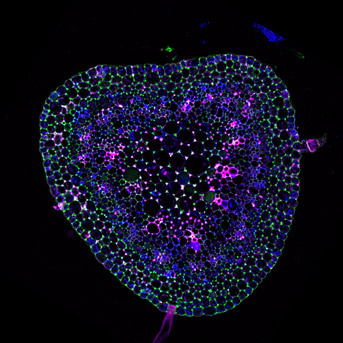